Nancy Rowe
Giidaakunadaad (The Spirit Who Lives in High Places) n’dizhinikaaz (is my name): Nancy Rowe is a Mississauga, Ojibwe of the Anishinaabek Nation located at New Credit First Nation, ON.  Nancy holds an honors BA in Indigenous Studies and Political Science. She is an educator, consultant and a Traditional Practitioner of Anishinaabek lifeway’s, views and customary practices and is currently completing a Master’s degree of Environmental Resource Studies at the University of Waterloo.  She is an avid volunteer who coordinates Akinomaagaye Gaamik, a grassroots initiative to provide educational opportunities for all peoples interested in Indigenous perspectives of life, health, education, history and the environment.  “Education is the doorway through which we all can create a common ground and understanding of not only Indigenous Peoples but also, and more importantly, our environment.”

Jodie Williams
Currently Jodie works as a Program Officer at the Ontario College of Teachers in the Standards of Practice and Accreditation Unit where she supports provincial consultations related to teacher education and policy development.  Her role is to also foster relationships with First Nations, Métis and Inuit that support the integration of the standards, teacher education, additional qualifications and accreditation.  As former Chair of the First Nations, Métis & Inuit Education Association of Ontario, and Department Head of Alternative Education and First Nations, Métis & Inuit Studies in the Dufferin Peel Catholic District School Board, Jodie is a highly skilled leader dedicated to the pursuit of excellence in education. A fierce advocate for the environment, land based learning and Indigenous Knowledge, including the revival of Indigenous Languages, Jodie travels across the province delivering workshops and presentations that focus on building community relationships in order to support student well-being and success.  Jodie's professional portfolio can be found HERE.

Colinda Clyne
Anishinaabekwe and proud mother of Max, Colinda is the curriculum lead for First Nations, Métis and Inuit education at the Upper Grand District School Board.  She has been a teacher for 24 years in various capacities, from Special Education head to teaching English, history, and First Nations, Métis & Inuit studies.  Colinda has been leading and facilitating professional development for over 15 years. In her current role, Colinda creates the system wide action plan for First Nations, Métis and Inuit education in her board.  She works to build capacity in K-12 teachers and administrators, connecting elders and traditional practitioners with teachers and students.  She works hard to create relationships within her local community, school communities and indigenous groups.  She seeks out traditional teachings for her personal growth and spiritual well being, and to keep her grounded in the work she does. 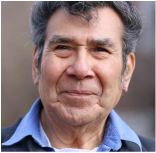 Geronimo Henry
Geronimo Henry was brought to the Mohawk Institute Residential School, also known as the “mush hole” in Brantford at the age of 5 where he spent over 10 years of repeated torture and abuse.  Referred by a number instead of his name, Geronimo was forbidden from speaking his native language and stripped of his culture. Instead of receiving an education, he had to milk cows and feed chickens on the farm. After having survived this “nightmare”, he has also struggled through divorce, addiction and a lifetime of post-traumatic stress disorder. Geronimo now spends his time sharing his story in order to educate all people on the realities of residential schools, the impacts of intergenerational trauma and why it is critical that everyone is aware of this.

Isaac Day
Isaac is a Medicine Man born on the Serpent River Reserve in Ontario. He was raised by his Grandfather in the Traditional Way.  After many years of his teachings being suppressed through Residential School, Isaac began regaining the teachings through other well known and respected traditionalists such as Dan Pine and Joe Eagle Elk. He is a seer and uses ceremonies to help interpret the Spirit World. He also works as a Traditional Counsellor. Today, Isaac, inspires many people to regain and retain their spiritual inner being. He uses his spiritual insights and gift of seeing to heal the mind, body and spirit. Of the many ceremonies that Isaac is capable of doing, he prizes the one that helps others to be able to find themselves so they can help themselves.

James "Mawla" Shawana
I am a Anishinaabemowin teacher at Lloyd S King Elementary School at New Credit First Nations, Ontario Canada.  I am a father of four children and a grandfather to 12 grandchildren.  I am a musician, and enjoy singing songs in Anishinaabe.  I am also a traditional dancer and powwow singer.  I teach drumming and singing Anishinaabe words songs on the big drum.  Teaching Anishinaabemowin is what I enjoying doing, and hearing the new speaker’s speak is most rewarding.  Gchi Miigwetch.

Maurice Switzer
Commissioner Maurice Switzer was recently appointed to the Ontario Human Rights Commission and is the principal of Nimkii Communications, a public education firm which focuses on the treaty relationship between First Nations and the Canadian government. Maurice Switzer is a citizen of the Mississaugas of Alderville First Nation, where his grandfather Moses Marsden was Chief from 1905-1909. He is Zhgaag (Skunk) Dodem Anishinabek, and Okwaho (Wolf) Clan Haudenosaunee, passed down from his great-grandmother Esther Hill from Tyendinaga. He also is proud of his Jewish ancestry. He has recently retired as director of communications for the Union of Ontario Indians, a position he previously held with the Assembly of First Nations. He was a member of the inaugural class at Trent University, where he was the first Indigenous student, and has been a faculty member at First Nations Technical Institute, Huntington University, Canadore College, the Banff Centre’s Aboriginal Leadership program, and currently, the University of Sudbury. Maurice was also the first Indigenous publisher of a daily newspaper in Canada.  His public education activities include presentations on Treaties and Wampum Belts for students, educators, and government employees. Maurice was inducted into the Nipissing District Human Rights Hall of Fame in 2003 and in 2010 named a recipient of an Anishinabek Nation Lifetime Achievement Award.

Isaac Murdoch
Isaac  is Fish Clan from Serpent Rive First Nation and grew up in the traditional setting of hunting, fishing and trapping.  During his many years living off the land, Isaac has learned many of the stories and legends that accompany many of the Sacred Sites and Values placed on Mother Earth and has become a wonderful narrator and advocate for these precious treasures. His many years of experience of conducting ceremonies have helped him maintain a special balance between man and nature and he is known for his advocacy for getting the younger generation in-touch with the land and these Sacred Sites.  Through his company Ojibway Connections, Isaac spends most of his time teaching young people the traditional skills of living off the land and has facilitated dozens of Cultural Camps over the years.  Isaac has travelled internationally as an advocate and spokesperson and has had the opportunity to meet with people such as Pope John Paul II, Queen Elizabeth & Prince Charles as well as many Canadian dignitaries including the Prime Minister.

Ray John Jr.Turtle Clan, from Oneida Nation, Ray has been in the education field for almost 20 years and works as a child and youth worker with high-risk students. A proud father of two boys, Ray uses a value system based on family as the foundation of his speaking engagements in order to help guide people to this beautiful way of life. Through the creation of a personal medicine shield, his message, based on aboriginal culture and teachings, focuses on the importance of establishing balance in all things by demonstrating respect for others, modeling positive leadership qualities amongst peers, being a good role model for younger students as well as looking after each other and our surroundings. His message is expressed in music, dance and classroom discussions to bring an entertaining and meaningful opportunity to reflect on how we treat each other, and how others might be affected by our actions and words.

Betsylee Kechego
Boozhoo, Aaniin kina weya! Waawaaskone n’diznikaaz , Aajijaak N’dodem, Deshkan Ziibiing N’doojiba. Greetings everyone my name is Betsylee Kechego and I am from Chippewas of the Thames First Nation.  The original name for our area where I come from is called Antler River and I am from the Crane clan and I am an  Ojibway/Anishinaabekwe N’daaw.  I am a teacher/and 2nd language learner of my grandmother's original language which is Ojibway/Pottowattmie. I have been learning from various teachers and fluent speakers of the language for the past 7 years. However I have previous memories of learning and hearing the language as a child. It is through these teachings and memories that I have seen the world through a different lens of learning and teaching.